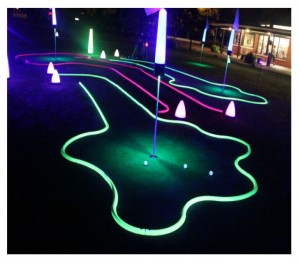 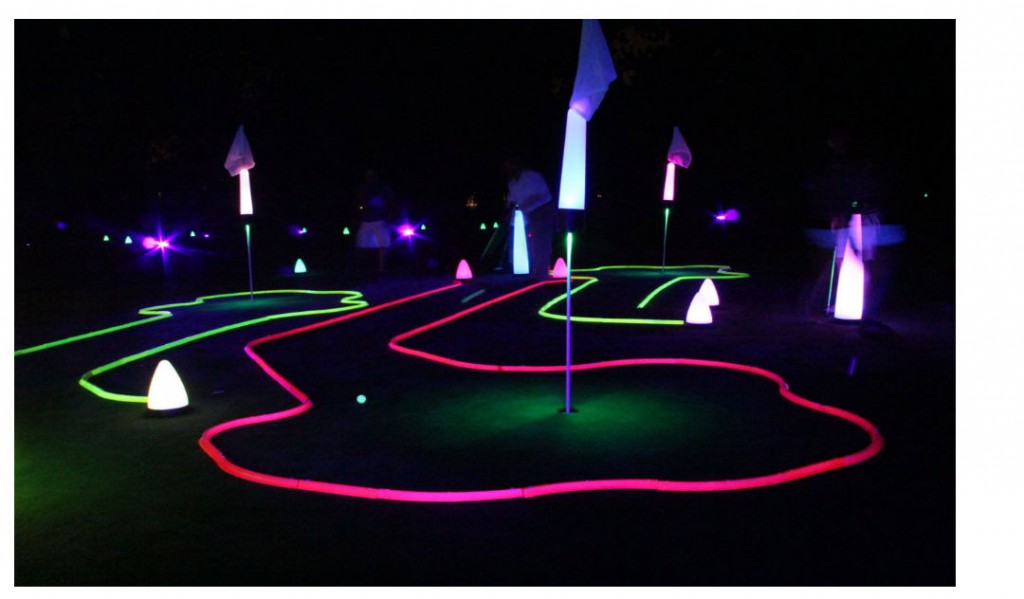 Friday was the grand debut of Cosmic night putting at The Billy Caldwell Golf Course in Chicago. This was definitely a night golf event to remember. We drove up from Louisville through the corn fields  and windmills of Indiana to showcase our new form of neon night golf entertainment.

Right now the course puts on old school glow stick night golf events every Friday night and they get a pretty nice crowd. It’s clear folks want to play at night in Chicago for sure. So they invited Laser Glow to come on out and light up the 9th hole to show golfers what night golf should really look like. We also debuted ‘cosmic putting’ on their practice green. We set up 3 cosmic putting holes so players could warm up by playing a black light putting experience before they headed out onto the course for 9 holes of night golf.

The cool thing was that it only took about 30 minutes to set up the putting track and even less to take it down so we were not beat by the end of the evening. We just set it up, put about 6 UV black light Glow Blasters around the outside to turn everyone neon bright and hung around taking pictures and listening to people have a blast.

The first positive of our cosmic putting event was that with our black lights the course was legitimately bright. Playsers could see themselves, the ball and their clubs. This is something you can’t do with traditional night golf glow sticks and LED golf balls.

So what did players think of our neon version of night golf? After interviewing a bunch of people it’s become clear that a combination of maybe 9 holes of cosmic putting combined with no more than 6 holes of on-course night golf is the perfect combo so golfers get their full swing night golf jones while giving them a very cool social experience close to the club house.  More than 6 holes of on-course play is a long time in the darkness, even with our LED night lights.

Basically everyone want a tight 2 hour experience. The black light putting opens the door to inviting your friends to mess around as you are out on the golf course. Several players said one key testimonial about how we lit up the 9th hole, “this is that night golf should be”. Wow. They also said our LED Glow markers lit the fairway “so that it looked like an airport landing strip.” How cool is that. What they are saying is they can’t wait to see the end of brailing around the course with a glow necklace and a few glow sticks around the green. 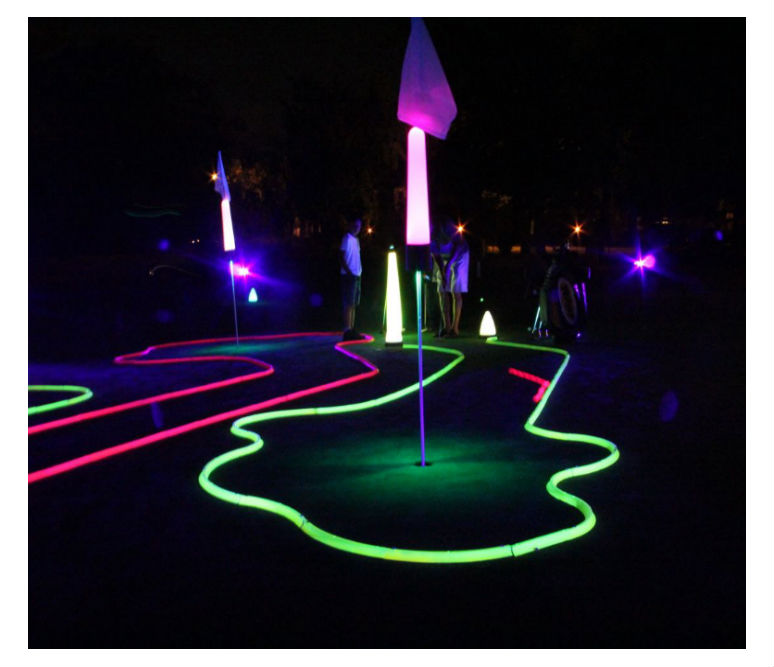 Cool Golf Fundraisers: As players filtered through our cosmic putting course it became clear that everyone wanted way more than 3 holes. They wanted a cosmic competition with an DJ and some prizes. This was  a testiment that numerous couples played the course again and again. It became clear that cosmic night golf putting competitions could become an awesome fundraising event for high school bands, clubs and sport teams because now you can affordably set up 18-36 mobile putting holes on a golf course or around a schools running track or even their synthetic football field. The best part is that the players don’t have to be golfers to participate in the fundraiser. They just need to want to glow in the dark by sporting some fluorescent clothing and stepping on the course. Now a school band can do a cosmic golfathon where players raise money per hole or just pay to play. The best part is that it’s at night so everyone will be available for a cool Friday night fundraiser with DJ, music, neon glow and a mountain of people laughing and playing all night.

Thank you very much to the Billy Caldwell golf course for hosting us. It was a great course and a great time. We recommend it to everyone who lives or visits Chicago. Look for full cosmic night golf events all over Chicagoland and the midwest this fall and in the spring of 2014.