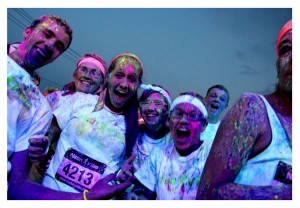 A Neon experience of a lifetime.

To start with, I’ve never had more fun than my night at

the Neon Vibe 5k Fun run in Peoria Ill Saturday, Sept 7, 2013. When we got the call that the Neon vibers wanted to use our glow lights, I was psyched. At the time they were on the road in Virginia putting on an event. In short order I was on the road driving from Louisville to Peoria 350 miles north west. Driving into the expo fairgrounds it began to hit me that this was going to be a blast. The stage had been set up, the black light start and finish lines were ready to go and all we needed to do is put out our glow lights and spark them up at sunset.

As car after car, runner after runner began to flood the parking lot it began to hit me that this wasn’t your 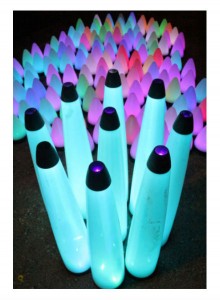 normal 5k fun run. This was going to be an event. As the sun went down we took a bobcat cart, drove around the course and turned on the course with a click of a remote. As we finished sparking the last lights on the back side of the course we could hear the music begin to start thumping in the distance. Like some kind of tribal draw, we drove back to the start finish and DJ Ray spinning on the stage. Moments later the madness began. In the midst of music, glow powder and squirt cannons of fluorescent glow, the first group of runners entered the start line ‘glow zone’. 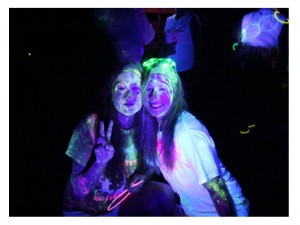 After the Neon Vibe crew got everyone psyched for the run the countdown began and the runners took off, one wave after another. Neon glowing, music flying everywhere. I was in awe. As the 3,500 runners wound their way around the course I shot these images and had more fun than any running race I ever ran in or watched. It was pure athletic insanity.

As waves of runners came in they were greeted by amazing music and a throng of fluorescent fans having a complete blast for what seemed like hours. Here my first photos of a great night. Hats off to the Neon Vibe, a truly awesome fun run you simply cannot miss.